The day before yesterday I picked up a dvd copy of Dee Snider's Strangeland.
I had seen this film almost 10 years ago when it first came out and thought it was a very disturbing film. I had forgotten why. Instead of reviewing this film, I am just going to tell you if you haven't seen it already you should. This film was reported as being taken from headlines when Dee Snider (lead singer of Twisted Sister) wrote it. Infact two songs written by Snider back when he was still part of Twisted Sister were based on these headlines.

I have a great distaste for videogames and if I had known this movie was based on one I would have past on it. BloodRayne with such big names as Micheal Madson, Meatloaf and Billy Zane starring in it I was expecting at lest a half decent production. The best part of this movie is the fact they shot it in Romaina it'self. (And half of the locations can be seen in much better films such as Roger Corman's Dracula Rising or Ted Nickalou's Subspecies series.Or for that matter any film by the Full Moon Entertaiment group) There is little plot to find wholes in but this hardly even has a baseline. The blood is too over the top not just splattering but drowning everyone with each kill. Not even Udo Kier who is the Royalty in vampiric actors could save this movie. It's not subtle nor is it even cheesy it's just bad. The only one in the movie who had a believable hairdo is the actor who's bald, there are just so many bad wigs in this alone to make you cringe and it is only slightly better then Dracula 3000 which is another Udo Kier mistake. Micheal Madison plays a vampire in Vampires Anonymus which at lest had a plot. The swordwork in BloodRayne was well trained but over used. The saddest point I need to make is the fact a sequal is already in the make. It relies too much on flash backs to build the story which are overly stylized but have zero substance. If someone asked me what was BloodRayne's motive-what was it about-I would have to say it's about an hour and a half too long.
This film only gets 1 fang out of 5 from me. 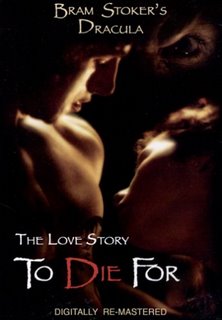 Not much is changed on the remastered 2005 dvd other then the title BRAM STOKERS DRACULA THE LOVE STORY TO DIE FOR which in 1987 was simply called To Die For. The story itself is a loose retelling of the orginal Dracula, combining the novel with the legend of Vlad Tempes. (the need for a new title is to keep it from being confused with the Kidman film of the same name, but does nothing to help stop it from being confused with the Oldman Dracula.) We follow Vlad in modern LA in the 1980s as he is trying to find a house and falls in love with the reincarnation of his former lover. The focus is more on the character Martin who is the hunter in this case. This film was good enough to have a sequel titled TOO DIE FOUR TWO SON OF DARKNESS which was released in 1991. Not a horror film as much as a dark drama the story has enough power to keep you watching but if you are looking for anything extra on this dvd you wont find it here.

At the height of doing commericals for a weight loss group, Lynn Redgrave put out this film entitled MIDNIGHT about a tv horror hostess who is about to loose everything. Think a darkerside of Elvira Mistress of the Dark (both released at the same time) with more drugs, sex and rock n roll and you have a dramatic version of the LA horror sceen in the late 1980's. Add aged sexsymbol Tony Curtis as the evil tv producer Mr. B. and you cant help but feel sorry for the leading lady. To qoute from the film "shes just the ghoul next door." this film got a 4 and 1/2 out of 5 fangs rating from me. 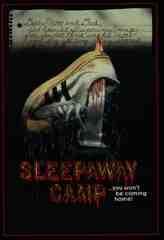 Anchor Bay has just released 4 different sets of movie boxsets, packaged to look like a case of beer. The titles of these include MAN'S WORST FRIENDS, WALKING DEAD, THE DEVIL MADE ME DO IT and CAMPY CLASSICS. The boxset in the Campy Classics contains Elvira Mistress of the Dark,Vamp,Transylvana 6-5000, Return to Horror High, Return of the Killer Tomatoes, and Sleepaway Camp.

rotten to the core

Dracula Bites The Big Apple. What can I say other then it just bites. Packed as an extra feature on teh dvd for VAMP, it opens with a disclaimer stating that it was the first project of the VAMP team on graduating from film school. And boy does it look it. There is a very thin plot where upon Dracula makes a decision to leave Europe after draining everyone dry to come to New York in hopes of find new blood in the night life. At best it is a sad mixing of RockyHorror and Love at First Bite, but plays more like a really stinky sketch from SNL. and at only 22minutes the highlight is a cameo of the owner from Studio 54. If this is a film you are hunting for stop hunting. If you are like me and bought Vamp, skip the extra and just watch the trailors a second time around. This doesnt even get 1/2 a fang out of five fangs from me.

VAMPIRE ASSASSINS Starring Ron Hall, Gerald Okamura, and Rudy Ray Moore.The cover art is deceiving with its picture of a warrior with his head down, all back lit and looking very slick. I just finished reviewing this for yahoo, and feel the need to review it once more, so forgive me if I go word for word with what I have already wrote there, but the best thing about this film is Rudy Ray Moore and he is only in it for two minutes. Everyone knows that I am a champion for the underground film but this one needs to be buried deep underground and left there. Here is a film thats main ingredients are a martial arts class and an eMac iMovie program. It lacks any kind of ability to be good. The main character is a hunter who gets turned(all the power none of the weakness)sounds like a Blade rip off to me. And the one liners have been written well enough to be Buffy material but their delivery is less interesting then watching paint dry. The montages are incoherent at best and just jump from one badly lit sceen to another. Cliche ridden this film does nothing but give some out of work actors a job, the sound crew are the only ones who know what they are doing. It has the heart and soul to be mediocre but lacks the meat to flesh it out. I only give it one and a half out of five fang ratings.

movies for the season part two

Here is a vampire movie that leaves you scratching your head all the way through it. A story about ego, misunderstandings, rumors and the subculture of our time. Love Bites was released a few years ago and is a subtitled film, but if you have the time it is worth a look. This one gets a four out of five fang rating from me. only 34 days till Hallowe'en

movies for the season part one

with 45 days left till Hallowe'en did you really think that i wasn't going to do a few movie reviews with the theme? WHEN GOOD GHOULS GO BAD this is a made for tv movie from a couple of years ago. it is set in a small town that has banned Hallowe'en and all because of a local legend. it is a Disney film so the fx are topnotch and kid friendly. it has all that is needed for a fun laugh and gets you into the spirit of things. Another one that falls into this category is MOM'S GOT A DATE WITH A VAMPIRE. Another Disney made for tv movie. Here two teens are out to set there mom up on a date so that they can go to a concert.

Vampire Clan which is based on a true story is a poor showing at best. It follows a group of kids from one city to another as they kidnap a member of their clan and murder her parents. Anyone who did follow the news reports ten years ago about the "clan" would agre the handling of the movie was low rate, full of holes as fars as information and well about a half hour too long. (even though the film only runs 87 minutes) I have read two of the documentary books (which I found to stumble over themselves with information that at times didn't make sense) and felt the movie version of this documentary could have and should have been treated with more of a documentary feel. Too many people that I have talked to over the last few years since the film was released didnt believe it was a real story. Anyone who wanted to view this film but hasn't yet do yourself a favour and skip it. I am hoping that on the anniversary of this situation that a real documentary will arrive and shed some light on this topic.

I feel the need to address this film. ELVIRA'S HAUNTED HILLS. I am a major fan of the actress Cassandra Peterson, and have listed her as my all time icon, but when this dvd hit the shelves a while back, not only was I disappointed, I felt cheated. The character that she has built an entire world around (and out of) is campy at the best of times(on purpose) but this film really scrapes the bottom of the cheese barrel. It doesn't follow any true timeline(it is set a hundred years ago but falls onto jokes set in pop culture) and the story is predictable and weak relying on the status of not only Elvira but on Richard O'Brian from the Rocky Horror Picture Show as it's only strengths. For a second turn at the big screen this film was a weak link in what should have and could have been a great series.

all my ducks in a row

I am really starting to hate this. It seems everytime that I start one of these things they are around for a day then they poof off into the nothingness that is the web. I resently bought the 3rd dvd in the wes craven presents Dracula 2000 series, Dracula Legacy.And it was much better then the second. The locations were beautiful, the writing was okay and the fact that they have replaced the lead actor who plays Dracula in each movie was confusing at first. But it does get explaned in this one. This gets 3 out of 5 fangs from me.