Revenge not so sweet 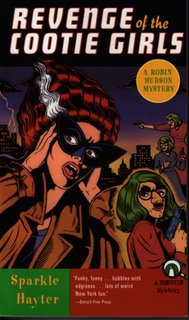 What does an overstressed reporter, some bad hair, and a murder have in common? They are all the key ingredents in the novel Revenge of the Cootie Girls by Sparkle Hayter. This is a fun yet slightly over the top murder mystery by one of the best chicklit writers around. We find our lead Robin Hudson just trying to relax after work with her best friends on Hallowe'en night in New York, but everything that could go wrong does when she is haunted by her past. Having to find her missing intern and keep what is left of her sanity is harder then it seems as she dodges mobsters and sometimes boyfriends in this comical-suspense story. From sceens of cab drivers under curses to bald fortunetellers this book will keep you laughing from cover to cover. 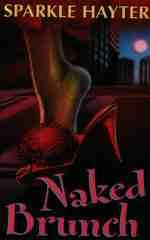 Naked Brunch by Sparkle Hayter is the 2002 relase from the top of the chicklit writers. We are taken through a four and a half month journey as a female werewolf deals with her relationships as well as the discovery of a major plot to take over the world. If you are a fan of her mystery novels then this one won't shock you at all, but if you are looking for the typical romance novel this whould give you a fresh change of pace. Once again Sparkle Hayter has given us somethng to sink our teeth into while we do some soul searching. 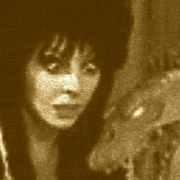 There were three books in a series by Elvira. Transylvania 90210, Camp Vamp, and The Boy who Cried Werewolf. All were don in the late 1990s and are slim reads with a twist on the three tradtional monster. A fun way to waste a few hours this season.