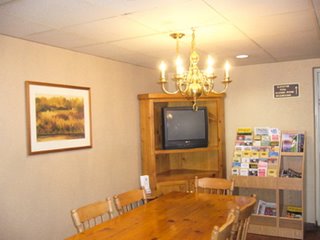 I have decided to downsize alot of the blogs I have around the web, because I just have too many and they take up too much time trying to work on them all. So since this one particular blog only had 3 entries in it, I have copied them here and removed the orginal blog.

My Uncle was telling me about this one night when a woman came in with her son and daughter and the daughter’s boyfriend. Not too strange. They got two rooms, again nothing strange about that. About 2 hours after they checked in the cops arrrived at the hotel. The woman had called them because the boyfriend of her daughter had started to get violent. He ended up breaking the vending machine on the second floor, as well as the lamp in the one room and the lock on the door. The son was fast asleep in the other room and claimed when the cops spoke to him that he heard nothing. Strange considering four other guests on their floor demaned their money back because of the noise. The woman ended up having to pay for the damanges.

August 15, 2006 One of the other night staff a few months ago had to deal with a group of teenagers staying in from Montreal. They were there for a school trip. Music class by the amount of guitars they had. Two of them were dating, when they got there, but not when they left 3 days later. The boy who by the look of things NightStaff said "was the lead." Translation {he was the most popular boy in school and the head of the music class} The girl she said "was the beta" Translation {the prettiest of the group} At one point the boy was sitting in the lobby with his guitar, and told to be quiet or take it to his room cause the other guests were complaining of the noise. He got huffy and stormed outside stating that "I will go outside on the street and make money busking" {this city that is illegal} We all laughed once he was outside, well they {the NightStaffer, my Aunt and Uncle} I let the mad fit of laughter out while he was standing there cause I am evil. The girl wandered out into the lobby in her pjs and no shoes crying cause he had just broke up with her a few hours before. This was to be the sceen for the next few days at the hotel, her wandering around like a zombie with tears. Needless to say, sitting around that hotel that weekend was less then fun because about every 15 minutes the hotel staff had to deal with another guest on their floor complaining about the noise in the middle of the night. And everytime one of the staff went to see what it was about they would hear the guitars halfway down the hall before they even knoceked on their doors.
August 14, 2006Sitting in the hotel lobby where my Uncle works the night shift, a cup of lukewarm coffee in hand, I tend to see alot of "odd characters". Everything from teens trying to get a room because they are drunk and just don’t want to get caught to strippers who work at the stripclub two doors down. Some nights it is dead to the point of feeling like you are in a Stephen King novel, and other times you need a second or third person to help just answer the phones.
Posted by ardeth blood at 2:10 pm